Written by Krish
September 27, 2019
Facebook
Twitter
WhatsApp
Email
- Advertisement -
The made-in-India Ford Figo Aspire (Left Hand Drive) (called the Figo in Latin American markets) has scored a four-star rating in the latest round of Latin NCAP crash tests,. The compact sedan was given four stars for adult occupancy and four stars for child occupancy.
“Frontal impact: The protection offered to the driver head was adequate and passenger head received good protection. Driver and Passenger neck was good. Driver chest received marginal protection and passenger chest received good protection from the restraint systems. Driver and passenger’s knees showed marginal protection as they can impact with dangerous structures behind the dashboard. Driver and passenger’s tibias showed adequate and good protection. Footwell area was rated as stable and showed insignificant deformation. Feet protection is good. The bodyshell was rated as unstable. Side impact: The car offered good protection to head, abdomen and pelvis while chest received marginal protection. Side Pole Impact: was not performed as the car does not offer side head protection as standards. ESC: The ESC was tested and its performance met the regulatory requirements of Latin NCAP. The car offers 2 frontal SBR. All of the above explain the 4 stars for adult occupant protection,” the crash test report said.
In terms of safety kit, the Brazil-spec Figo Aspire comes with four airbags, ABS (Anti-lock Braking System), ESC (electronic Stability Control), seat belt pretensioners at the front and Isofix child seat mounts at the rear as standard. 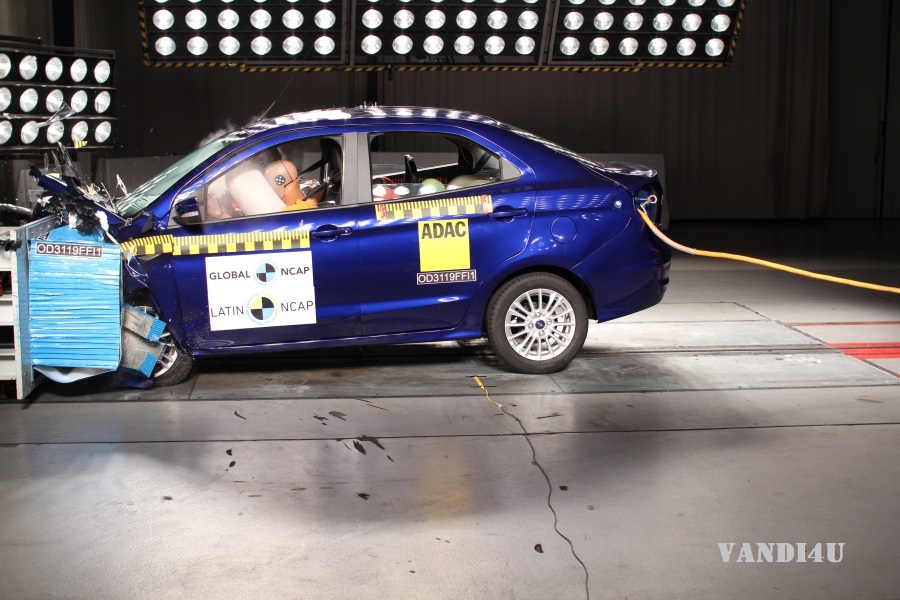 In India, Ford Figo-based compact sedan, the Aspire is priced at Rs.5.89 lakhs (Ex.showroom PAN  India). The Ford Aspire gets three-engine option in India. The 1.2-litre Dragon petrol engine churns out 96bhp/120Nm. The diesel on the other hand is a 1.5-litre that churns out 100bhp/215Nm. Both these engines are offered with a five-speed manual. There is also a 1.5-litre petrol engine and this is mated to a six-speed AT. This engine option is only offered on the top-of-the-line Titanium+ petrol variant.
Click here for Ford models, prices, specs, images and more details.
- Advertisement -

Ford has announced that it will revamp its business operations in India, with plans to significantly expand its Chennai-based Ford Business Solutions team and...
Read more