Written by Krish
August 18, 2019
Facebook
Twitter
WhatsApp
Email
- Advertisement -
James Bond has driven plenty of vehicles over the course of his many on-screen exploits. The one that is most quintessentially Bond, however, is the silver Aston Martin DB5. This is the car that even non-car lovers will recognize as 007’s preferred ride. 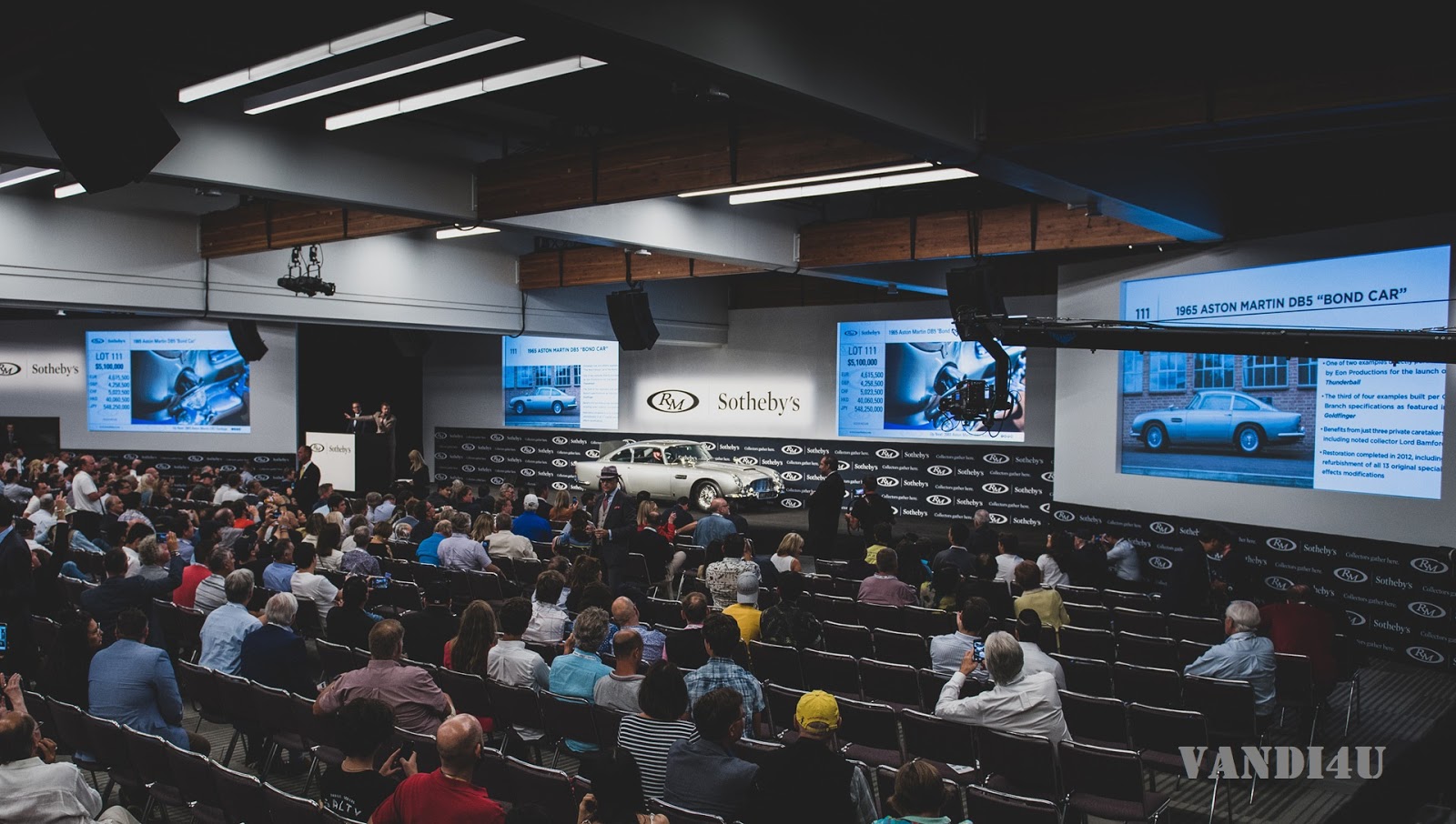 One Bond fan went all out on Thursday to own a piece of movie and automotive history. The mystery fan placed a winning bid of $6,385,000 at RM Sotheby’s Monterey Car Week auction to purchase an original Bond DB5. The figure was well above the estimate of between $4,000,000 and $6,000,000 and is a new record for DB5s.
The iconic Aston Martin DB5 driven by James Bond in seven films-but most notably Goldfinger, Now one example is going up for auction, this is the third of four Goldfinger-spec DB-5s built. That makes it pretty damn rare, but not quite as rare as the orginal movie-ready DB5 that had been modified by John Stears and subsequently lost in 1997. It wasn’t used in Goldfinger, but was instead built for a US tour to promote Thunderball. One human can be worthy (or,well,rich) enough o take home a piece of film history.
The Aston Martin DB-05’s auction will take place in RM Sotheby’s auction taking place during August’s 2019 Monterey Car Week. The Promo cars built to the same specification s the DB-5 that appeared in “Goldfinger”, including ll the spy equipments like bullet-proof sheild, rotting license plates and ram bars. 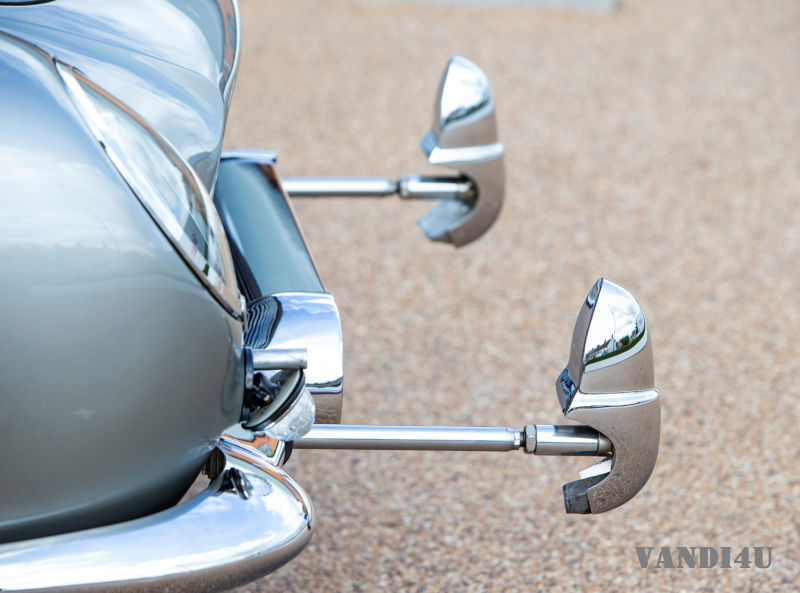 After their promo duty, the cars were mothballed by Eon Productions as the next Bond movies featured different cars. They were then sold to collector Anthony Bamford in 1970, who later sold chases no. DB5/2008/R to the owner of the Smokey Mountain Car Museum in Pigeon Forge, Tennessee. It was eventually sold again in 2006. 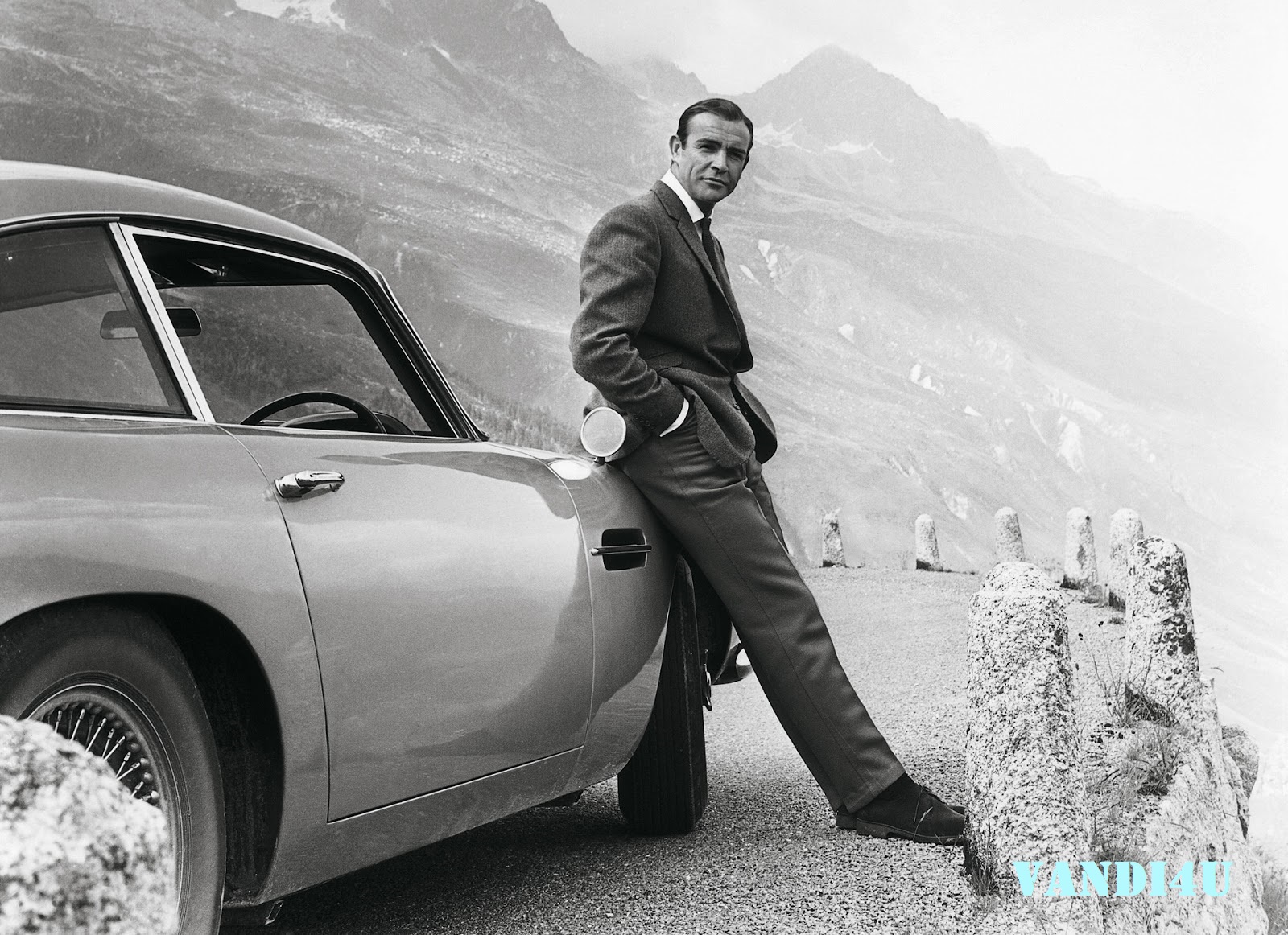 This car then underwent a full restoration in 2012 by Roos Engineering in Switzerland-one of the few facilities specialized enough to be considered Heritage Specialists by Aston Martin themselves. The chassis and body were completely refinished. Most importantly for Bond fans, though, all of thirteen of the modifications originally designed by production designer Ken Adam have been refurbished to original spec. 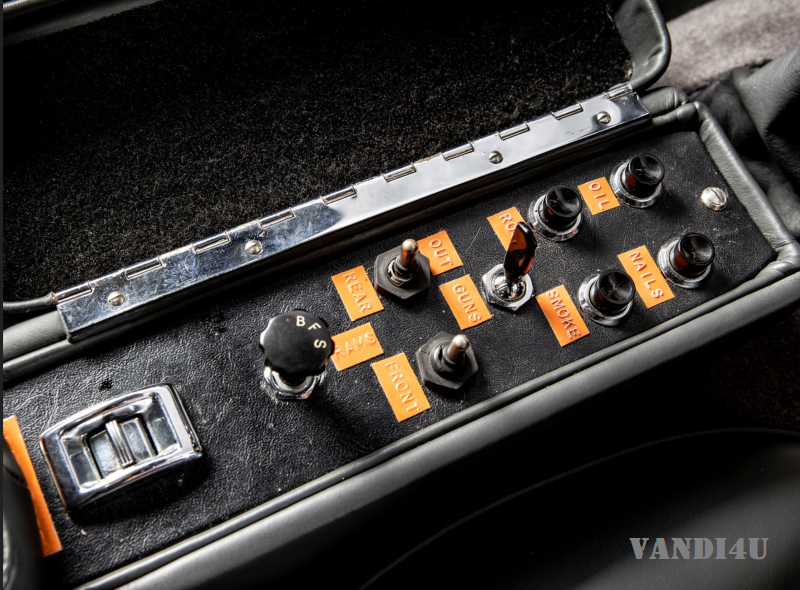 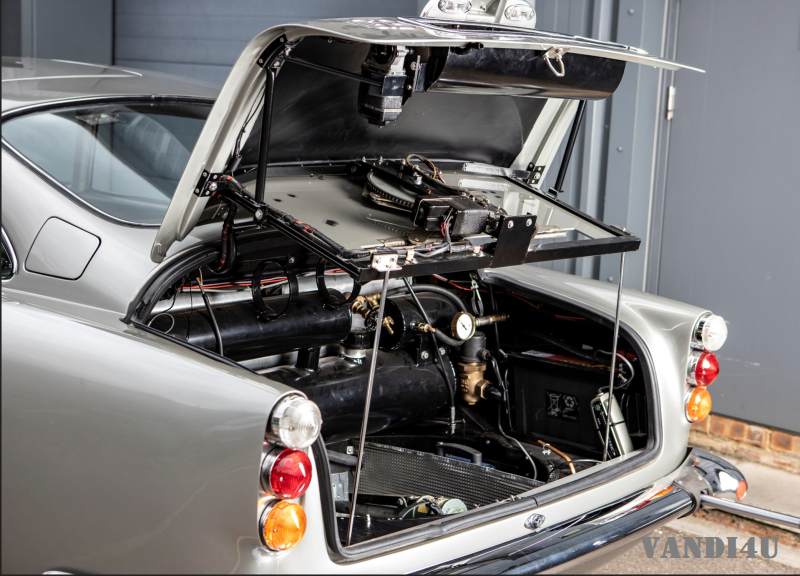 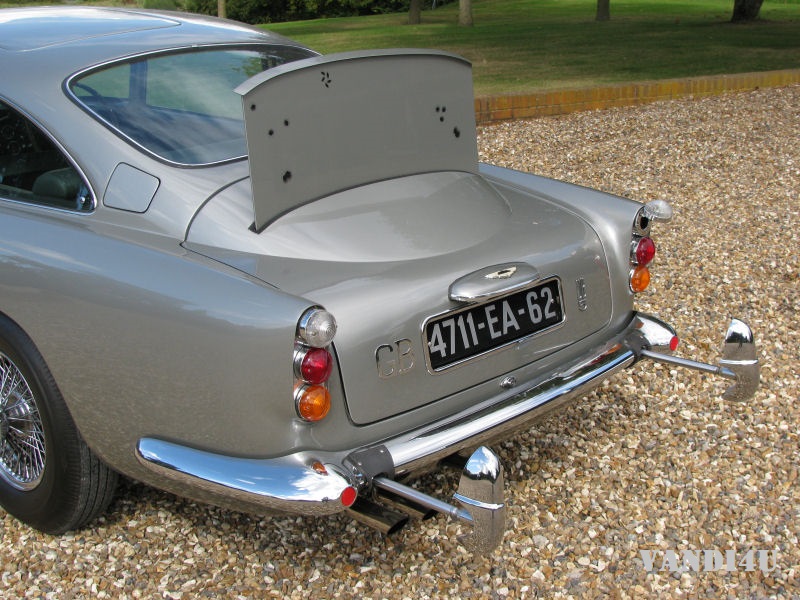 That means you, too, could have a Browning 30 caliber machine gun in each fender, wheel-hub mounted tire slashers, smoke screen dispensers, revolving license plates, and even a passenger-seat ejection system. This kind of power should only be utilized by the most discerning of humans. 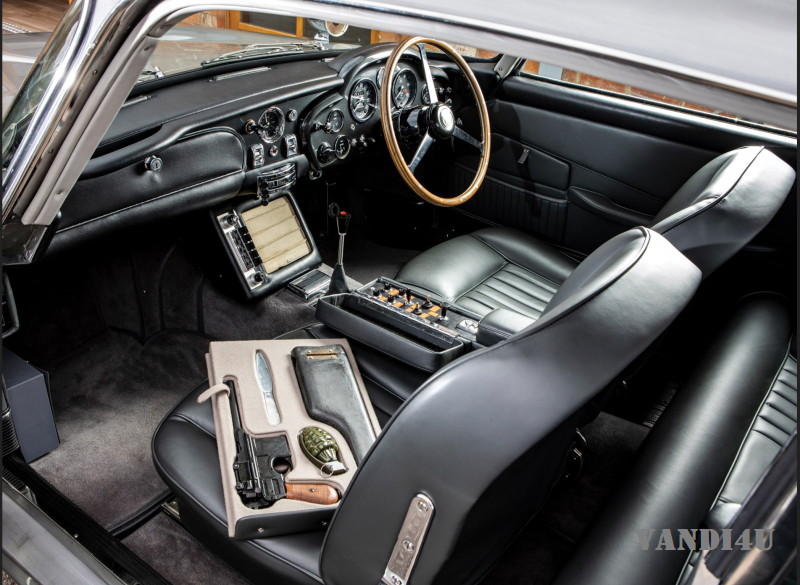 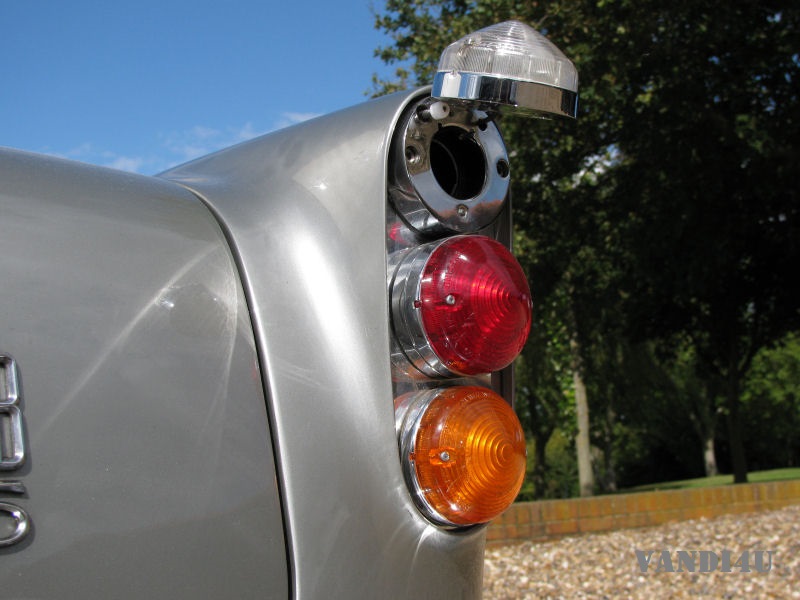 On of the two DB-5 that was actually used during filming “Goldfinger” and “Thunderball” was sold for $4.1 Million in 2010, though the car will worth more in this auction as there is bull in colector cars over past decade. 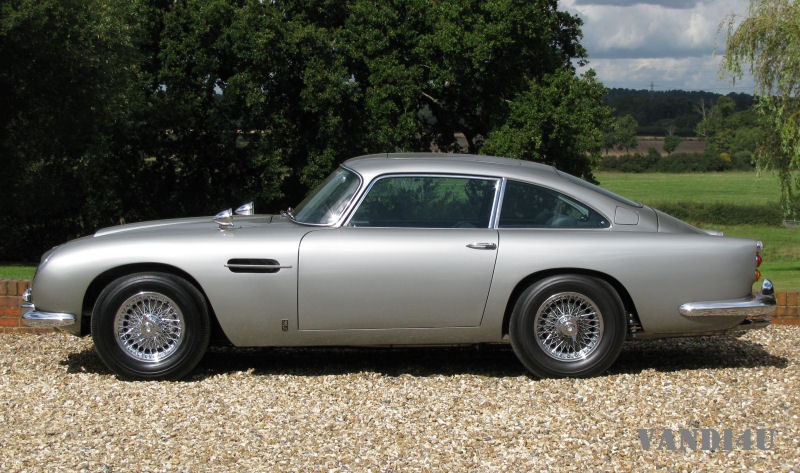 RM Sotheby’s lets you know that there will be absolutely no internet bidding on this car and you had to per-register to even have a chance to think about buying it. Anyone who lost the bidding war can call up Aston Martin and order one of the 25 DB-5 “Goldfinger” continuation cars that the automaker is currently offering. These cars will also come with all of the spy equipments that appeared in movie.
- Advertisement -