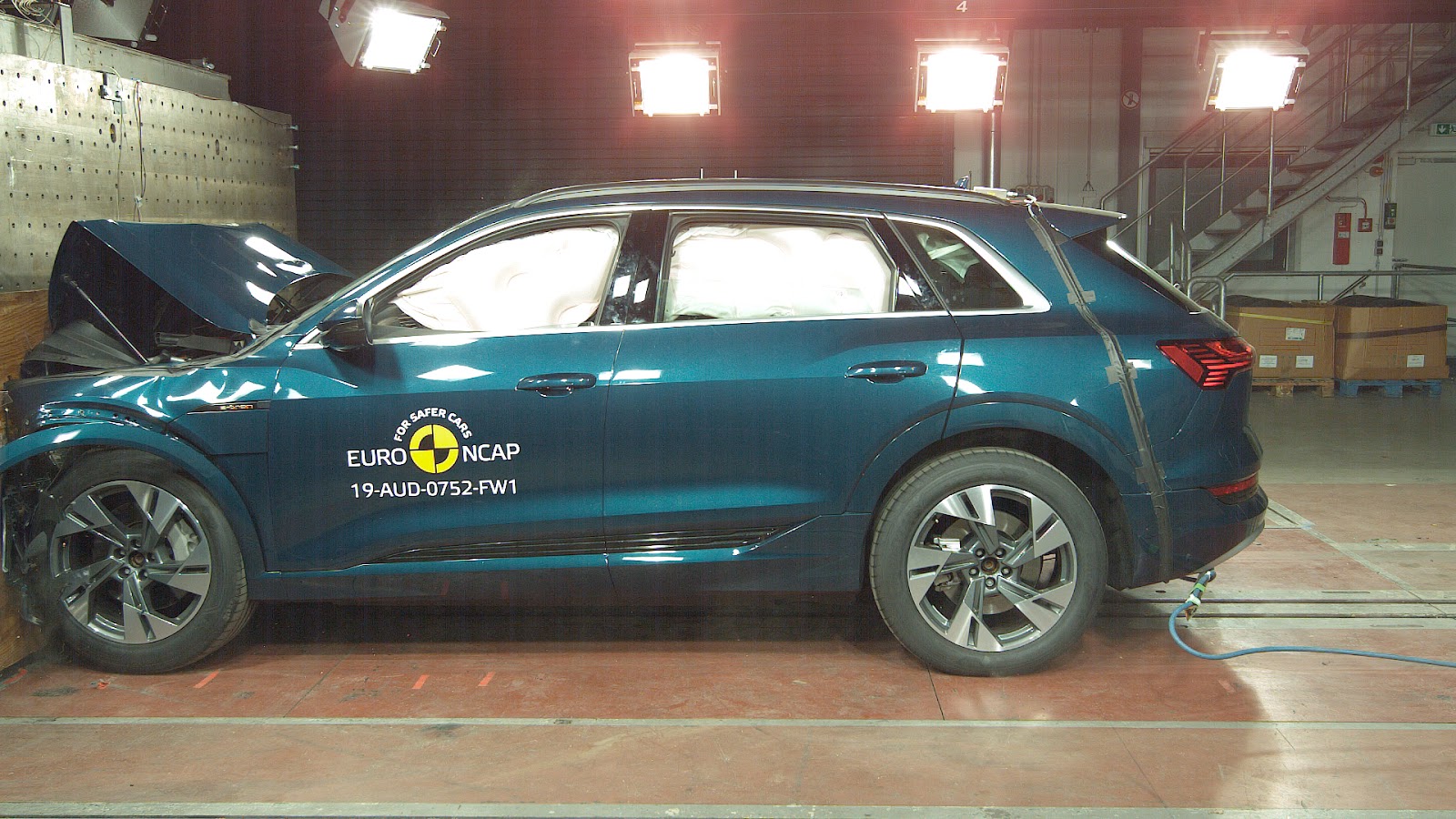 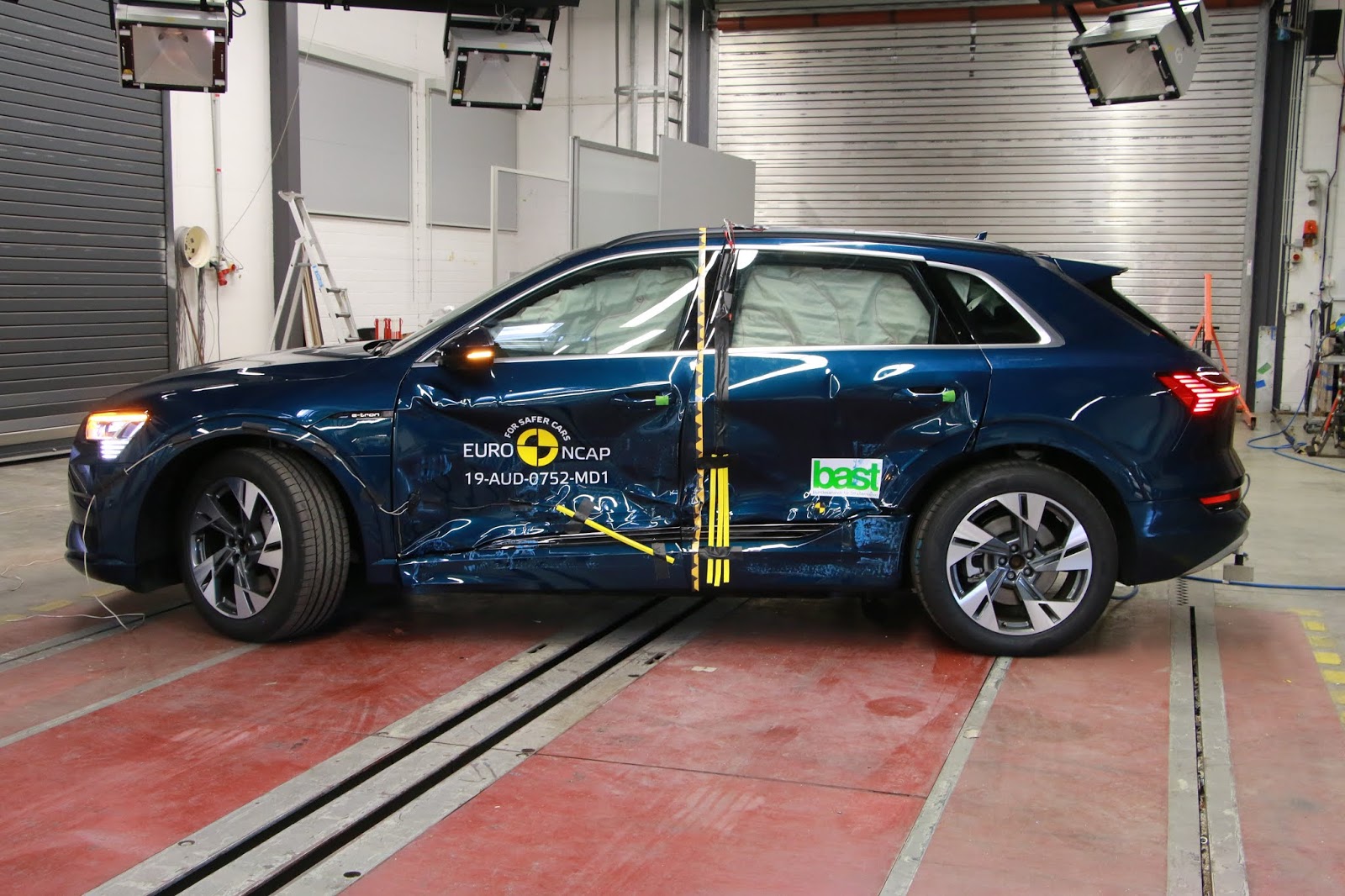 The passenger  compartment of the e-tron remained stable in the frontal offset test. Dummy readings indicated good protection of the knees and femurs of both the driver and the passenger. Tests on the front seats and head restraints demonstrated good protection against whiplash injuries in the event of a rear-end collision. A geometric assessment of the rear seats also indicated good whiplash protection. The standard fit autonomous emergency braking (AEB) system performed well in tests of its functionality at low speeds at which many whiplash injuries occur, with collisions avoided or mitigated in all scenarios. 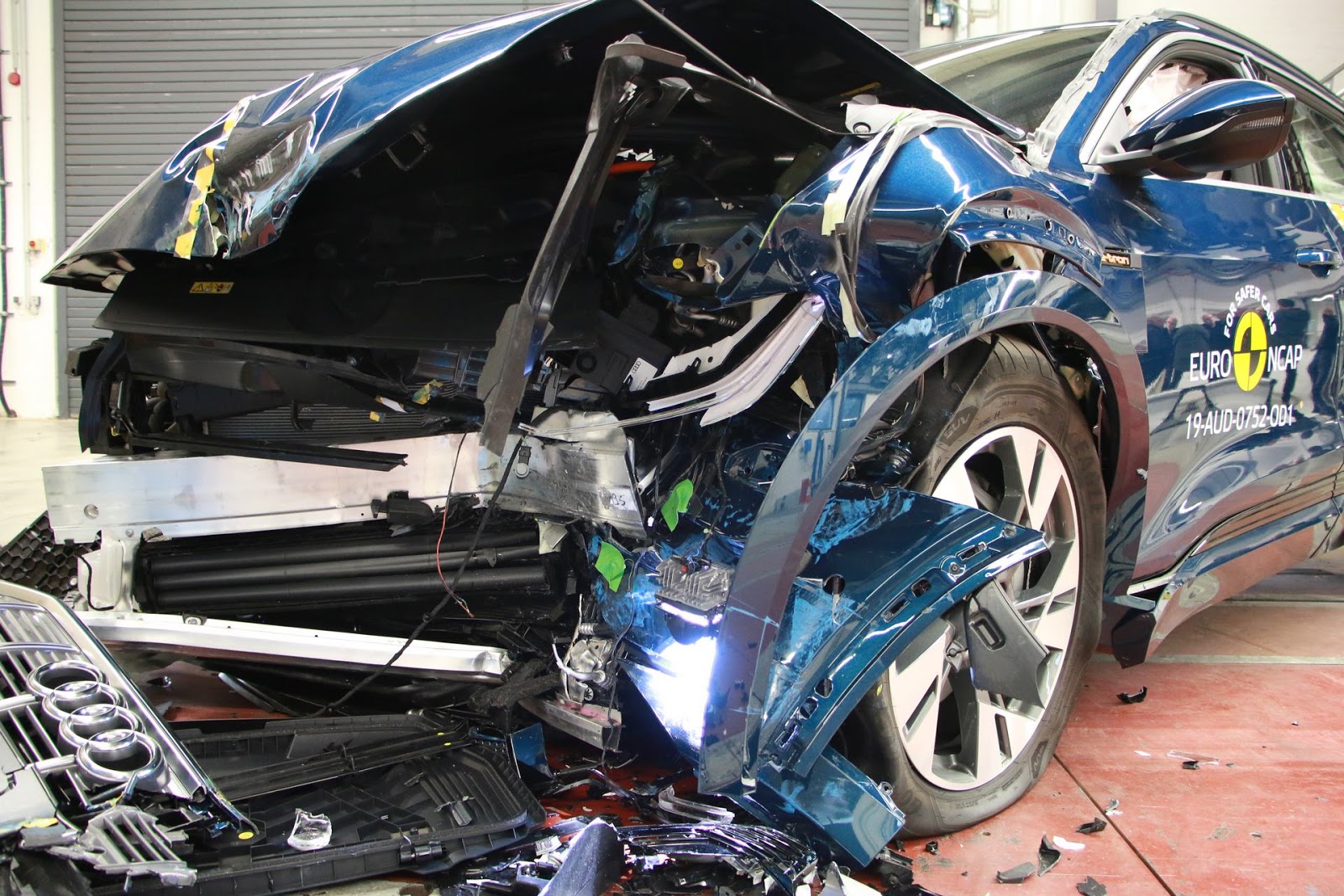 In the frontal offset test, the e-tron provided good or adequate protection to all body areas of both the 6 and 10 year duties. In the side barrier test, protection was good for all areas and the car scored maximum points in this test. The front passenger airbag can be disabled to allow a rearward-facing child restraint to be used in that seating position.Proper information is provided to the driver regarding the status of the airbag and the system. 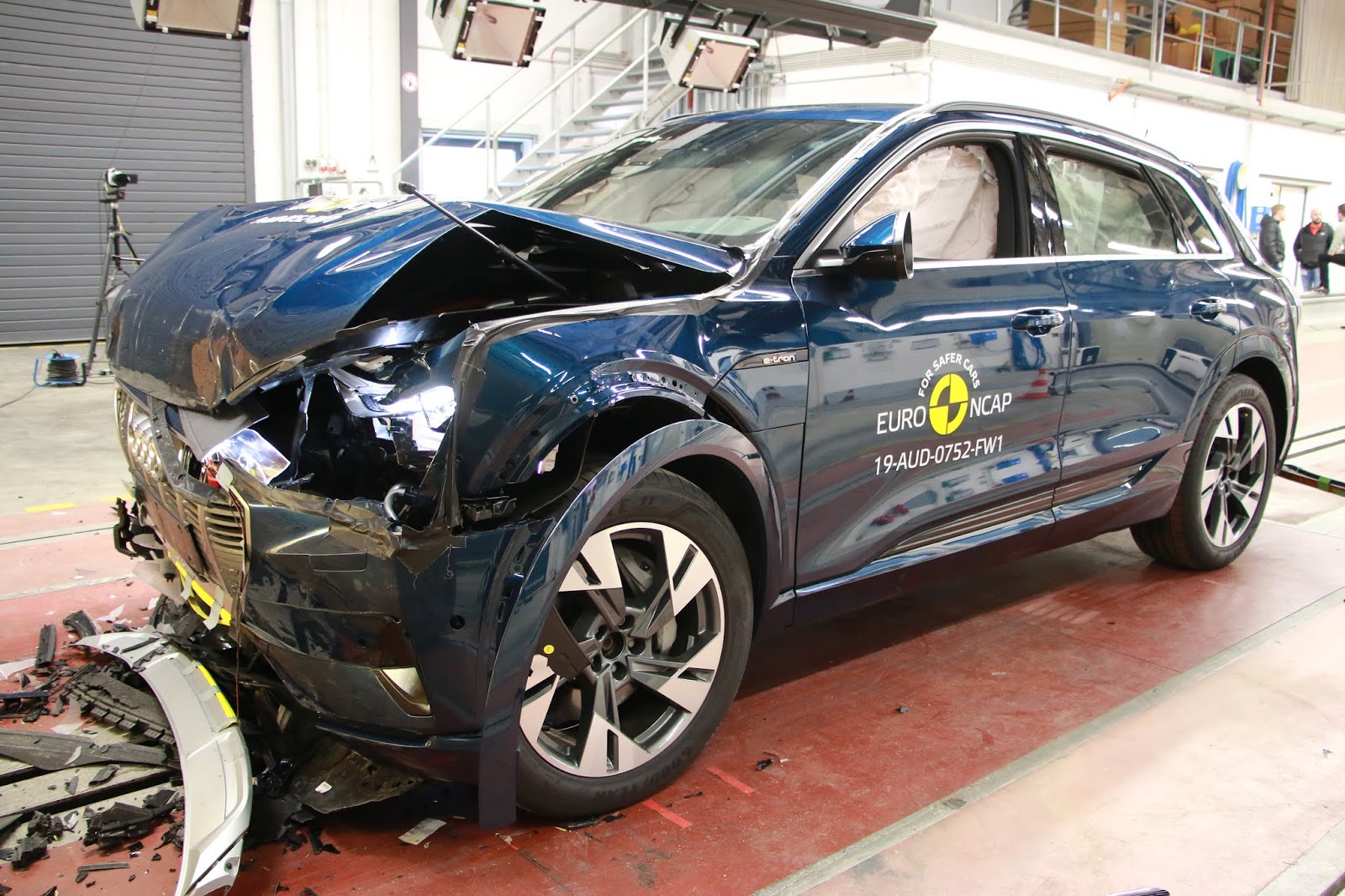 The protection provided to the head of a struck pedestrian was good or adequate over almost the entire surface of the bonnet, with poor results recorded only at the base of the windscreen and on the stiff windscreen pillars. The bumper provided good protection to pedestrian’s legs. Protection of the pelvis was more mixed, with areas of good and poor protection. The AEB system can detect vulnerable road user as well as other vehicles, and performed well in tests of its reaction to pedestrians and to cyclists. 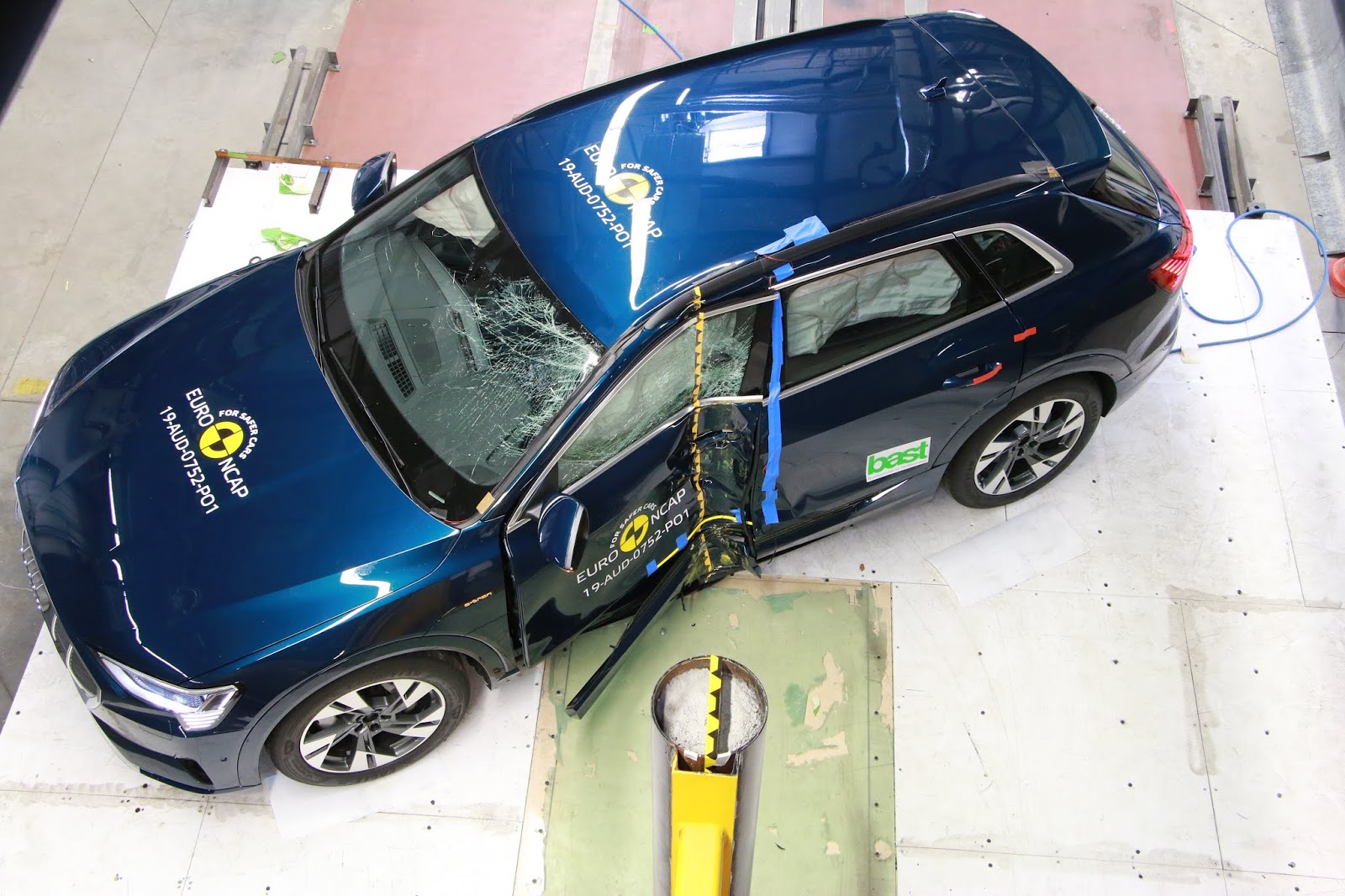 The Audi e-tron’s AEB system performed well in tests of its performance at highway speeds. The standard speed assistance system consists of a driver set speed limiter. An additional speed limit information function is available as an option, which recognises the local speed limit and present the information to the driver. The lane support system helps to prevent inadvertent drifting out of the lane and also intervenes in some more critical situations. The front and rear equipped with a seatbelt reminder. The Audi e-tron will be launched in India by early 2020.
- Advertisement -

Audi 80 turns 50, the First Million-seller for the brand

Exactly 50 years ago, in the year 1972 when the Summer Olympics was held in Munich, In July 1972, the Ingolstadt based Audi world...
Read more
Article

Mercedes-Benz has launched its flagship sedan S Class in India. The Mercedes-Benz S-Class also known as the 'best car in the world' is being...
Read more
Car